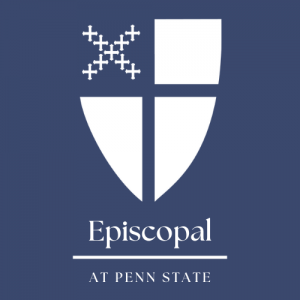 Episcopal at Penn State is a mission of St. Andrew’s Episcopal Church in State College, PA
(208 West Foster Ave). We function as a student organization on campus, led by our chaplain (and faculty advisor,) Ted Christopher, and a cohort of undergraduate as well as graduate students. We have been formed and reformed over the years – sometimes as a separate congregation, sometimes as a student club – and we look forward now to being the Episcopal branch of the Jesus movement on Penn State’s University Park campus.

Episcopal at Penn State is a welcoming and inclusive Christian student organization. We strive to seek and serve Christ in all persons, loving neighbor as well as self. We affirm the God-givenness and God-giftedness of all identities, shapes, and sizes! We invite skeptics as well as believers to come and imagine the good work we can do together.