The Reverend Jeffrey A. Packard, Rector 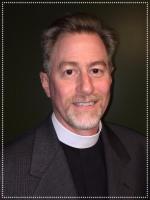 Father Packard is a son of St. Andrew’s.  He was born and raised in State College.  Baptized at St. Andrew’s as an infant, he grew up participating along with his family in parish activities—Sunday School, youth group, serving as an acolyte—and was confirmed by Bishop Dean Stevenson.  After graduating from State College Area High School, he attended Penn State where he majored in psychology.  He met his wife Sian (pronounced “Shawn”) while at Penn State. They were both active in the campus student ministry.  The two were married just after graduation.  Father Packard worked in a psychiatric hospital for three years, and then went to the Virginia Theological Seminary in Alexandria in 1992.  He graduated with a masters in divinity in 1995. Their first child was born that same year.  Ordained a deacon by Bishop Charlie McNutt, Father Packard came to be the curate at St. Andrew’s serving under Father Larry Hofer during his second year as rector.  He was ordained to the priesthood by Bishop Michael Creighton at St. Andrew’s on his thirtieth birthday.

Father Packard is delighted to be back in State College after more than 20 years away, during which he served parishes in northern Pennsylvania and in Virginia.  Along with their three adult children, his wife Sian and their many animals, he is settling into being the rector of the parish he loves so much and for so long.

The Rev. Edward (Ted) Christopher splits his ministry between St. Andrew’s, where he serves as Assistant Rector, and Pennsylvania State University, where he is Episcopal Campus Chaplain. Ted was ordained deacon (transitional) in May of this year, after having completed a course of study at the Stevenson School for Ministry in our diocese. In addition to this emerging ministry in the church, Ted is on the faculty at Penn State, where he serves as Artistic Director of Opera and Professor of Music (voice). He is married to Betha, who leads the early childhood music program at the Music Academy in town, and he is father to Madi, Bryson, and Anna who keep him busy and engaged and (usually) delighted. Ted is a cradle-Episcopalian with a deep love for our church, its traditions, and its heritage. He is also keenly interested in the emerging church, and the ways in which the Holy Spirit is continuing to form and reform the Jesus movement. He loves good food, good music, good theatre, and good company. He believes that faith formation is a life-long process and he is eager to support folks wherever they are on the path.

Deacon Joe completed the diaconate program with the Diocese of Central Pennsylvania School of Christian Studies in May 2005, was ordained to the diaconate and assigned to Saint Andrew’s in November 2005. He is a graduate of Penn State, a native of State College, and was baptized and confirmed at Saint Andrew’s. He and his wife, Sandra, have two children, Christine Krasnansky and Joseph DeLauter II, and two grandchildren, Chloe and Lauren Krasnansky.

Allison and her husband Dennis moved to State College in 1990 when Dennis started teaching   at Penn State. They joined St. Andrew’s in 1996 following the birth of their daughter, Caroline. Until Allison joined the St. Andrew’s staff, Caroline and her brother Connor, born in 2001, kept her occupied as a stay-at-home mom. At St. Andrew’s, Allison has volunteered with the pre-school which both children attended, taught Church School, assisted at Vacation Bible School, worked on many fundraisers and dinners for the parish and youth programs, served as a soup maker at the Community Café, managed the Gift Shop, served a term on Vestry, and continues to play violin for the 5:00 Sunday service and serve on the Parish Life Committee. She has a degree in English and Psychology from the College of William and Mary and has worked as an impaired risk life insurance brokerage manager and an event planner for Encore Books.

Kathy and her husband Mike, a professor of Materials Science at PSU, have lived in State College since 2007 with their boys Gabe and Nat.  Kathy has been involved at St. Andrew’s in various ways since she arrived in town, but when she is not doing that or keeping the home fires burning, she likes to paint and draw, read, try to get outside, and attempt to keep up with movies and music. She has a bachelor’s degree in Religious Studies from Kenyon College in Ohio, where she became an enthusiastic Episcopalian at the loveliest, creakiest, smallest college chapel you can imagine (where she was later married), the Church of the Holy Spirit. Kathy has done stints in social work, journalism, and elementary education before starting a family. She has been involved with education in the Episcopal Church in some form or another for almost twenty years. At St. Andrew’s she has spent time with really little kids up through teenagers and has loved them all.

Robin has been a member of St. Andrew’s since 1965. She lives in Spring Mills with her husband B.K., their dog and two cats. She and her husband were married at St. Andrew’s. Her father, the Reverend Derald Stump officiated. Their daughters, Madison and Samantha, were baptized and confirmed at St. Andrew’s and served as acolytes in their teens. Robin has always loved the beauty, good work, and community of our church. The friendships among the teachers and families at St. Andrew’s have been very meaningful to her. She loves sharing the lessons from scripture and church traditions with our children and learning from their wonder and faith. She is honored to join our staff to help coordinate the classes and learning experiences for our children. Robin has been a teacher since 1983. She also teaches in the State College Area School District.

Scott was born and raised in Clearfield and attended Clarion University. He worked for several years as a machine technician and for Murata Electronics and has been self-employed. He enjoys spending time with family, watching football, fishing and working around the house. Scott and his wife, Sara, live in Spring Mills. They have two children, Devin, who helps at Saint Andrew’s when needed, and Courtney.

Walter has been choir director at Saint Andrew’s since 1976. He is a graduate of Penn State and was in the army in Arlington, Va., where he continued to study music and met his wife, Molly, who sings in the choir. After graduate school he came to Saint Andrew’s and worked for the Arts and Humanities Library at Penn State. He has written numerous works for organ and for choirs.

In addition to his work at Saint Andrew’s, Walter has been active in the Diocese of Central Pennsylvania, serving as a member of the Diocesan Liturgy and Music Commission and teaching classes for the School of Christian Studies. He has conducted choirs for various diocesan events, including the  visit to the diocese of Presiding Bishop Katharine Jefferts Schori, and for the consecrations of Bishop Baxter and Bishop Scanlan. He is an honorary lay canon of the cathedral in Harrisburg.  Walter is also a member of the Anglican Association of Musicians, and of the American Choral Directors Association. He serves on the board of directors for its Pennsylvania chapter.

Gwen has been organist at Saint Andrew’s Church since 1983. Gwen holds a Master of Fine Arts from Penn State and a Bachelor of Music from Syracuse University. She studied organ with Donald Sutherland and June Miller.

Gwen has been a church musician since her high school years. She served as choirmaster and organist at St. John’s Episcopal Church in Cornwall-on-Hudson, N.Y., as a choir member at St. Bartholomew’s in New York City and assistant organist at First United Methodist Church in Ponca City, Okla., before coming to Saint Andrew’s. Gwen is a member of the Diocesan Music and Liturgy Commission, the American Guild of Organists and the Association of Anglican Musicians.

Mary lives in Lemont with her husband, Paige. They moved to State College in 1995 and found St. Andrew’s soon afterwards. Mary was received in 1997. Over the past 18 years, Mary has been involved at St. Andrew’s by serving as a Sunday School teacher, J2A leader, Treasurer, Investment Committee member, Coffee Hour host, Counter and currently a Rite-13 leader and Usher. She and Paige have two grown sons, Ian and Colin, who both served as acolytes at St. Andrew’s. Mary holds a bachelor degree in Business Administration from Western Washington University and works full-time as a Financial Officer for the College of Health & Human Development at Penn State University.

Julie has been a member of Saint Andrew’s since she and her husband, Tony, were received in 2001. She accepted the position of Treasurer in April 2019, but before that had been the Nursery Coordinator since 2006, and the Interim Youth Ministry Coordinator for one year.  Julie has two teenage daughters, Anna and Marlee, and she stays actively involved at St. Andrew’s by serving on the Parish Life Committee; attending Compassionate Life; working in the church flower beds; volunteering for the Community Cafe; and sometimes helping in the church office, including maintaining this website.

Vestry is the governing board of the parish. Members are elected by the congregation at the annual parish meeting in January and serve three-year terms conducting the secular business of the parish.

One of its traditional functions is to oversee the finances of the church but, along with the rector, the vestry also has a responsibility for the physical upkeep, if not enhancement, of the physical plant. As in many other Episcopal parishes, the vestry at Saint Andrew’s has developed interests in addition to finances and building maintenance. Each vestry member serves as a liaison to a particular ministry of the parish (e.g., Christian education, finance, companion parishes, investments, spiritual life, community outreach, music). In coordination with the rector, the vestry promotes the spiritual welfare of the church and engages in long-range planning. The members of vestry also serve as allies of and consultants to the priest in his service to the church, community, diocese and the national church. The rector is an ex officio member of the vestry and presides at its meetings. The leaders of the vestry at Saint Andrew’s are referred to as the Senior Warden (sometimes called Rector’s Warden) and the Junior Warden (sometimes called People’s Warden).