Shortly after the founding of Penn State in 1855, the Rev. George C. Field, rector of Saint John’s Bellefonte, began to visit State College to conduct services, a practice that was continued by his successors into the 20th century. In 1906, the State College chapter of the Brotherhood of Saint Andrew was formed and, two years later, the bishops of the commonwealth were persuaded to establish and support a mission church, naming it Saint Andrew’s in recognition of the Brotherhood.

The Rev. Canon Edward Monroe Frear was the first vicar and, in 1911, construction began on a small building and adjacent rectory at the corner of Foster Avenue and Fraser Street. But in 1921, upon Canon Frear’s return from active duty as a military chaplain, Saint Andrew’s was beginning to outgrow its space. Worship services and Sunday school were held in the one-room building but other activities took place in the rectory, private homes and in fraternity houses. Its mission at the time was to welcome Episcopal students and Penn State faculty, and it became so crowded that students were relegated to sitting on the floor at the back of the room during worship.

A building fund was established and appeals for support were made to the five bishops of Pennsylvania, with great success. The cornerstone was placed in February 1928 and, on November 8, 1928, Bishop Ethelbert Talbot presided over the consecration ceremony.

Saint Andrew’s continued as a mission church until 1952, when the Articles of Incorporation of Saint Andrew’s Parish were approved, and the Rev. Jones B. Shannon became the first rector. He was succeeded in 1957 by the Rev. Canon John R. Whitney, whose leadership helped establish the Parishioners’ Ministry, an active outreach agency that continues today.

The Rev. Canon James B. Trost was called to be the rector in 1965 and, among many other accomplishments in his 28-year tenure, he oversaw the capital campaign, construction and completion of the parish life center in 1973, the installation of the Schantz organ in 1982 and the installation of all but one of the Willet Studios stained-glass windows. He retired in 1993.

In the summer of 1994, the Rev. Larry J. Hofer was called and, with the installation in 1998 of the stained-glass “Te Deum” window in the south transept, the building that stands today was finally completed. Willet Studios of Philadelphia is known worldwide for its stained-glass windows, and the leaded, hand-painted windows at Saint Andrew’s are excellent examples of their exceptional design and craftsmanship. 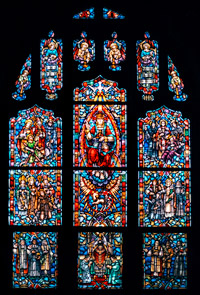 The Rev. Hofer also was instrumental in establishing companion parish relationships with Saint John’s Episcopal Church in Bellefonte and Santo Andre in Campinas, Brazil; the initiation of the Stephen Ministry program; and the purchase of Trinity House, which now serves as the rectory.

The Rev. Hofer retired in May 2008, and in September 2009, the people of Saint Andrew’s called the Rev. Richard Wall to be the fifth rector.

Fr Wall left St. Andrew’s in June 2015, following his call to St Paul’s K Street, Washington DC.  In November 2015, we call the Rev. Douglas Dailey as Interim Rector to lead in the daily life of the church as we search for a rector, and to continue its mission of welcoming all people into the body of Christ and reaching out to the community of which we are a part.